The ten-time Tony-winning musical is on tour!

Drama Desk Award winner Janet Dacal will be joining the national tour of The Band's Visit as Dina from January 3, 2020, during the musical's run at Proctors Theatre in Schenectady. Dacal will replace current star Chilina Kennedy, who departs the production on December 15.

Dacal was last seen on Broadway in Prince of Broadway with her other Great White Way credits including, Good Vibrations, In The Heights and Wonderland.

The Broadway favorite will be joining a cast made up of, Sasson Gabay as Tewfiq, Joe Joseph as Haled, Pomme Koch as Itzik, James Rana as Simon, Adam Gabay (Sasson Gabay's son) as Papi, Jennifer Apple as Anna, Marc Ginsburg as Sammy, Kendal Hartse as Iris, Sara Kapner as Julia, Ronnie Malley as Camal, Or Schraiber as Zelger, David Studwell as Avrum and Mike Cefalo as Telephone Guy.

The Band's Visit has a book by Itamar Moses, music and lyrics by David Yazbeck and is directed by David Cromer.

What is The Band's Visit About?

Based on the 2007 critically acclaimed movie by Eran Kolirin, this new musical adaptation sees two very different cultures mesh together throughout the course of one night. A simple spelling mistake at the Egypt/Israel border sees the Alexandria Police Band redirected to the wrong town, where there is no public transport, nor hotels. Taken in by the charitable restaurant owner as they discuss their predicament, the band are invited to stay at his various relatives' homes overnight. Love is in the air for one member of the band, which culminates in an enchanting evening at the local ice-skating rink. The others realise that their lives are changed forever after this change in circumstance.

The Band's Visit is now on tour! 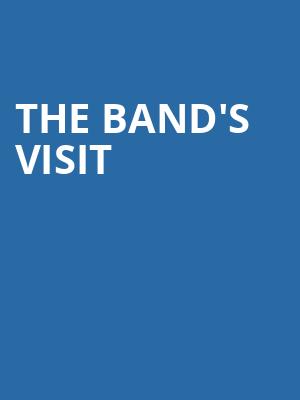 Boredom has never sounded sexier than it does in 'The Band's Visit', the beautiful musical by David Yazbek and Itamar Moses... includes one of the season's most exquisitely wrought score.