Three Reasons Why Tickets to The Lion King Make The Perfect Christmas Present!

The international hit is out on tour!

The Christmas countdown officially on! If you're struggling to think of gift ideas for the theater lover in your life, then here are three reasons why tickets to The Lion King will make the perfect present this Christmas!

Ever since its Broadway debut in 1997 The Lion King has been a must-see for theater fans across the globe and has now been seen by millions of people! Based on the iconic 1995 Disney animation of the same name, The Lion King follows a young lion prince, Simba, whose father's death puts his pride at risk from his evil Uncle Scar! Will Simba be able to protect his family, and become the king he was born to be?

With all your favorite characters, Zazu, Timone, Pumba and more, all making an appearance The Lion King is both a nostalgic treat and a wonderful welcome to the story for fans old and new!

If the songs or the story doesn't entice you then The Lion King's staging certainly will. Directed by Julie Taymor (the First Woman to win the Best Direction of a Musical Tony Award) The Lion King will wow you with its intriguing sets and beautiful costume design, allowing the animals of Pride Rock to come to extraordinary life right in front of your eyes!

Whether they've seen the musical 100 times or this is their first trip to the theatre, The Lion King is the perfect theatrical event to treat your loved one to this holiday season!

The Lion King is now on tour. Book your tickets today! 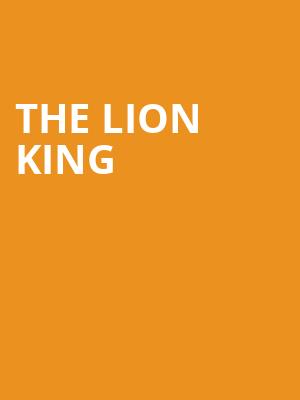 Theater to roar for. From the very first minutes of The Lion King you feel yourself on a whole new ground - no - in a whole new world.